Residents of the Valentine neighborhood celebrate the rich history of our area, both the people who settled here in the 1800’s and the sturdy homes and buildings that are, in many cases, still standing. At the same time, we understand that our history and stories and even buildings are at risk of being lost. We’re starting this history page to celebrate our past and keep it alive as new residents move in to Valentine.

The Valentine Neighborhood Association provided stories in each printed newsletter about important architecture and other history. These stories were archived on our website so they’ll be available in the future. We invite residents who have stories about the neighborhood – personal remembrance’s or old newspaper clippings or research you’ve done on your house – to share them. Send your stories to us​. 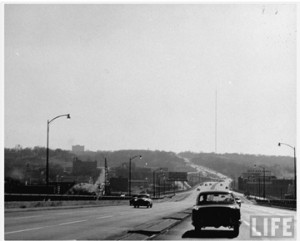 I recently spent a considerable amount of time researching the history of Southwest Trafficway. Its development tells an interesting story about the development of Kansas City.

The story begins in the 1880s when Kansas City ended at 31st Street and Westport began at 39th. The area in between, where Valentine lays today, was still farmland.

But as Kansas City grew, its wealthier residents fled from the downtown Quality Hill area where they first settled, and began to settle in new tranquil suburbs like the Rockhill neighborhood around the current location of the Nelson Atkins Museum. At the same time, Penn Valley north of Westport was filled with shacks and piles of garbage. Also city residents were calling for more parks and green spaces. The Board of Park Commissioners acquired 134 acres of land and razed 300 houses. They also created a scenic drive, Penn Valley Drive, to connect downtown businessmen to their homes to the south.

Kansas City continued to grow south, and by 1945 the city was looking for ways to reduce downtown congestion and get people to their new homes. The neighborhoods of Valentine, Roanoke and Coleman Highlands had been created around the turn of the century. Summit Street ran through these neighborhoods and connected to Penn Valley Drive. The city decided to turn the route into a “major business route” from downtown south. At the time, the city also intended to build other “traffic ways,” but progress on the others was slow or never began because of complaints from neighborhoods.

Southwest Trafficway was officially opened in 1951, as this picture in Life Magazine shows. While it was hailed as a modern thoroughfare, neighborhood residents expressed concern that the highway cut off access between Redemptorist elementary and high schools and the children living in surrounding neighborhoods, as well as elderly residents who need to cross the highway to get to church.

Read a more detailed article on the history of the Trafficway.