The Norman School, a major landmark in our neighborhood, is located between Jefferson and Southwest Trafficway at 35th Street. 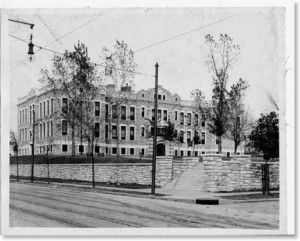 The school opened as a small frame building in 1906 to serve first and second grade children who lived in the newly-built residential districts in the Valentine area. Later the school was expanded into two wings trimmed in Carthage stone.

This postcard from 1909 shows the school near the entrance to Roanoke Park. The postcard shows Summit Street before it became Southwest Trafficway. The Kansas City Star in 1970 noted that Norman school was considered to be one of the most beautiful school plants in the city. It replaced a small frame school built for 1st- and 2nd grade children in 1901. The west wing, which is shown on the post card, was occupied November 5, 1906, and eight years later the east wing was finished. A large playground sloped away to Thirty-sixth street where there once was a deep ravine. Norman school was named for Joseph L. Norman, pioneer abstractor and president of the Board of Education. Norman had traversed the area as a Union soldier on his way to the Battle of Westport. He had later taught school in a school a little south of the new building. After his term as president of the board expired, they named the school in his honor.