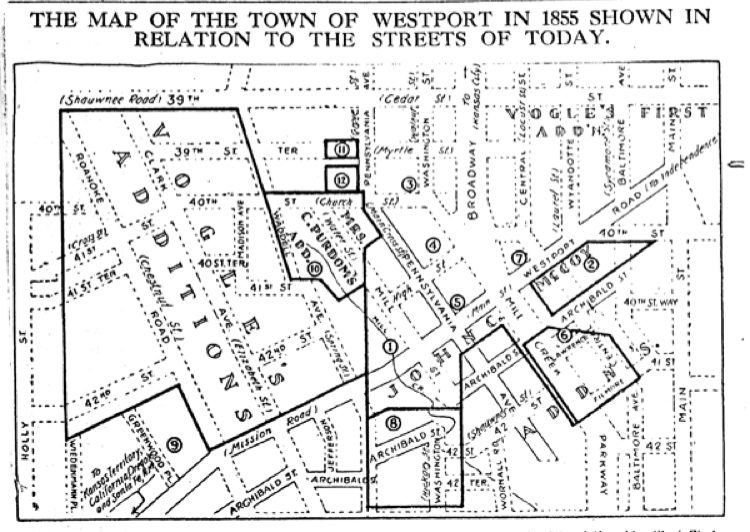 In 1937, The Star obtained a map of “Westport, Mo. and Its Additions” made in 1855. Its outlines are shown by the dark lines, with the dotted lines showing Westport as it stood in 1937.

The Star said: “Studying the old map, one observes that what is now Westport road, running diagonally across the chart, was once Westport’s “Main Street” east of Pennsylvania avenue and “Mission Road” leading southwest from that point. This was the old town’s principal thoroughfare and actually the Santa Fe Trail. What is now Pennsylvania avenue was designated in 1855 as “Main Cross Street.” The Broadway of today, north of Westport road, was merely a lane “to Kansas City.” Old Archibald street is unchanged on the plat today. The heavy outlines indicate the various additions to the old town as shown on the map of 1855. Numbered circles show the location of early day landmarks, a few of which still stand.”

1. Site of the old mill at Westport road and Mill street. Washington Irving mentioned this mill in his “Tour of the Prairies” as the last gristmill in the fringe of the western wilderness.

7. Where the old Union church, later the Christian church, once stood